SPOILER WARNING: Be mindful, there may be spoilers here. Turn back if you are as eager to read this graphic novel without and poor knowledge of the content, 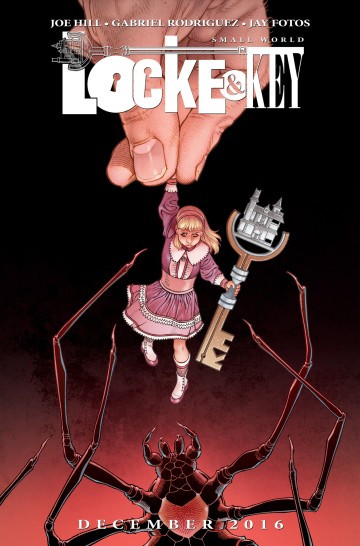 When I first stumbled on Joe Hill and Gabriel Rodriguez’s Locke & Key in my local comic store, I wasn’t sure what to think, aside from the fact that the first couple of pages were interesting enough to warrant that I would spend my hard-earned money on it. At the time, going to school full-time for an undergraduate degree and working in a video store, I was rather tight about how I spent my little bit of cash.

But that day, I went home with a winner that would quite literally become one of the few collections that I was hooked on enough, at the time, to go out and buy immediately, no matter what was in my bank account or where I was working.

Now, in 2017, Hill and Rodriquez have tempted those who fell in love with the twisted history of Key House and Lovecraft, with another shiny hardcover, Locke and Key: Small World. As far as size goes, this column does feel quite short, clocking in at under 25 pages of comic. So, rather than a full size story, the reader is greater with what feels like a single issue of a comic, sweetened with a few extras (art, original script, adaptation views, and interviews). All in all, it barely sates the appetite for new content that fans of the series (such as myself) have been craving since the end of the original series. However, in the contained interview, Hill and Rodriguez promise that there are more stories to come entering around these characters, Key House, and Lovecraft. So far, this seems limited to some short stories and collections, with the speculation of another six arc story (no commitment to that as of yet, it seems to just be an idea.) They also promise that the long-awaited television series with IDW Entertainment is still on the table.

The story itself is currently self-contained, taking you through a single experience by some of the Locke ancestors. The art, as always, is beautifully rendered, the detail excellent and the colour vivid.

Despite this, I found that the story itself was somewhat lacking. As a current ‘stand alone’ tale, Small World is just that, small. Where previously readers were drawn in to Bode, Tyler, and Kinsey, and thrown right into the darkness within the first 5 pages of Welcome to Lovecraft, Small World does not seem to lend itself to the same connection of character to reader. The Locke children seem quite cookie cutter. It seems as if a bit of connection was sacrificed in order to keep the story short and sweet. They are mapped on the page with care, but there seems to be pieces missing where the reader is supposed to feel for them. Each is most definitely individual, but aside from the stereotypical archetypes (the little lady, the trouble maker, the sage, and the fighter), there wasn’t much that seemed to make them a part of Locke and Key save for the fact that they are cast as part of the long line of Lockes to live in Keyhouse. At times, aside from the name and a double page decimated to introducing the readers to the new (or older) Locke family, it seems as if it could have been anyone waltzing across the page in the rolls.

The story, as said earlier, is linear. There are no flash backs, no flash forwards, and the whole tale seems to take place over perhaps the entirety of 3 hours, with very little fanfare, and even less exploitation of the previous dark atmosphere created by Hill and Rodriguez. The threat is quite mundane, only made a threat by the mishandling of a key. There is very little anxiety created by the monster that shows up, and the end is abrupt (though personally, I definitely grinned just a bit, because it was totally something that felt in tune with the level of threat created). Maybe this is because the family is not dealing , or has not yet dealt, with the true nature and breadth of what lies buried under Keyhouse, and as such the level of threat cannot reasonably be presented on the same scale.

There is one bit of the story that did have me perplexed, and that had to do with the previously established idea that one someone grows up in Keyhouse, they forget the magic of the keys, because the adult mind simply can’t handle what those keys mean. In this volume, three adults, all Locke’s, actively and knowingly engage in episodes with they key items. We know that Randell Locke, and even Ellie Whedon, forgot about the keys once they became adults (Ellie being a bit of an exception later on, as we learn that she has been manipulated). However, in this short story, not only do the adults know about the keys, but one actively created a new key as a ‘birthday present’ to teach his daughter how to manage a house, but another actively utilizes the Shadow Crown to tell stories. Now, there could be a reason for that, but I felt that the establishment that only the young could understand, use, and see the power of the keys was an integral part of those whole story, and that going back on it seems a little heavy-handed for such a finely crafted story.

All in all, Locke and Key Small World was a decent return to the world that Hill and Rodriguez built, and it could be a promising connection to another series in that same world. However, it does have its pitfalls. Value wise, it seemed a bit much to through such a small story into hardcover. I know it has been done before, but it seems like they are leaving the world and the story out there to float on its own, without any truly secure mooring. The beauty of the art fills in where the story falls flat, but there are holes that were overlooked. I hope that when Hill and Rodriguez return again to this generation of Locke’s, they will be able to bring back more of the thrill and imagination that existed in the original series.

3.5/5 for me, all things considered. Still feels right to have in on the shelf next to the other hardcover editions of the series. but, for something that was announced with a fair bit of hype in June 2016, it seems fairly scanty on the delivery.

Read it; Watch it; Listen to it: Recommendations from the Darkness

So, I’m in the final leg of thesis work on my MA, working on last revisions and all that rigmarole. However, I do have some recommendations for those out there looking for something to watch, read, or listen to that they might had missed the first time around. Nothing ground breaking, but these are some of the series and songs that I have been really taken in by lately. Now, some of these are available on Netflix or iTunes, others require a bit of creativity to get, and yet others you will have to purchase, because that’s what the artistic teams and artists deserve. Check it out, and if there is something that had really caught your attention or imagination in the past while that you think needs more attention, leave a comment.